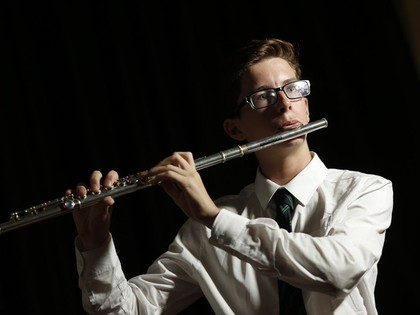 We aim to nurture and encourage musical talent in all fields of music; we aim to enrich young peoples’ lives through performance and composition; we aim to prepare young people for life beyond Christ’s and to develop their general cultural awareness; we aim to develop creative skills which will bring about self-confidence and maturity, as well as the increasing ability to work collaboratively with others; we aim to engender a lifelong love of music in students; we aim to provide performance platforms and to act as ambassadors for the school; we aim to communicate that interaction with music is a fruitful and beneficial activity for all people.

There is a strong musical life at Christ's School, with opportunities abounding for a broad range of music making at all levels.

Our excellent music facilities, opened by Sir Tim Rice in 2004, include a large performance space, a plentiful range of classroom instruments including keyboards and varied percussion, three practice rooms, and outstanding music technology facilities, with Apple Mac computers running Logic Pro and Sibelius. Together with our team of highly skilled and professional classroom and peripatetic teachers and other external musical collaborators, these afford us the opportunity to support and release students to flourish and realise their musical potential.

Throughout the curriculum, we explore musical ideas, techniques and styles, through the three key areas of :

Learning takes place within the following overarching themes at Key Stage 3, with Years 7 and 8 having 90 minutes of Music weekly, and Year 9, 60 minutes :

Students can opt to take GCSE Music in Years 10 & 11,  where we follow the Edexcel syllabus, with 150 minutes of Music per week. Students have a more individualised programme of study at GCSE and can follow many of their own creative and performance projects, alongside studying a core of set works covering an extensive range of musical genres.

We offer A level Music at Christ’s School (Edexcel), which is a stimulating course, where students further come in to their own in their musical development. The detailed study of hugely varied set works, alongside growing students’ facility in aural skills, harmonic understanding, improvisation, composition, ensemble and solo performance make for a busy, challenging and rewarding musical and personal journey.

A level Music students are also encouraged to run extra-curricular music clubs as part of their musical development.

Plenty of opportunity exists at Christ’s for extra-curricular music:

The department has an open-door policy at break, lunchtimes and after school, where students can come in and practise. Typically at these times, all available spaces in the department are being used by students, as well as teacher-directed rehearsals of various instrumental and vocal groups - making for a very vibrant department !

Christ's Music department hires independent tutors offering high-quality tuition in the full range of instruments, including voice. Numbers in all areas continue to expand. The department is flexible and will aim to provide tuition in areas not currently covered if there is a need.

Tuition is currently offered in piano, guitar (classical/jazz/rock/bass guitar), drums, recorder, flute, oboe, clarinet/saxophone, brass, singing, violin/viola, cello and double-bass. Individual tuition in the field of music technology may also be an option, although we do run after school clubs for this also.

We offer a range of clubs and ensembles for students to participate in, including choir, concert band, jazz group, ukelele club, music technology club, samba band, flute group, ad hoc groups and, where appropriate, ensembles run by our A level Music students.

We generally host two major concerts each year, which give the chance for singers and instrumentalists to exercise their skills on the public stage. A concert at Christ's will typically contain: instrumental solos (classical, jazz, popular); vocal solos in a range of styles; the school choir; a band or orchestra; a variety of ensembles, large and small; rock groups; music technology pieces.

We also host several “At Home” concerts every year : informal, small-scale concerts designed for the playing and singing of solos and small ensembles in the more intimate environment of Christ's Music Centre.

Musically gifted pupils will be strongly encouraged to join external youth music organisations to supplement what can be achieved in school. A number of students have joined local youth orchestras (such as Ealing, Thames or Stoneleigh Youth Orchestras and the London Schools Symphony Orchestra) and have been encouraged to attend the junior departments of the main London music colleges. We currently have students attending the junior Guildhall School of Music and the National Youth Jazz Orchestra (NJYO) Academy, as well as a student being a member of The National Scout and Guide Symphony Orchestra.

Students are encouraged to take part in external musical activities, including composing competitions. One of our students has recently been awarded prizes in two such competitions, including a Highly Commended composition in the BBC Young Composers Competition.

Those who continue with post-18 musical study have to choose between music college (conservatoire) and university courses; the former is more practical and geared towards musical performance, and the latter more academic, but still with a lot of practical music making.

We currently have three students studying music at music colleges with a view to working in the profession. Four of our recent ex-students are playing in bands professionally, one in the National Youth Jazz Orchestra.

The study of music is linked to a much wider variety of careers than many people imagine (see below).  The presenter James May is one of many broadcasters and presenters who are music graduates; many music graduates pursue careers in law, accounting, etc. as well as arts administration, the media, facilities management and many other similar areas; and there are some who do indeed pursue a career in musical performance, though this is a very hard route and only for the very talented: we do, however have recent Christ’s alumni who have followed this route!

Benefits of playing an instrument: http://www.effectivemusicteaching.com/articles/directors/18-benefits-of-playing-a-musical-instrument/

Why become a music graduate (NOT just if you want to become a professional musician!)

The list below shows the huge variety of non-musical careers that have been followed by Cambridge University Music graduates: